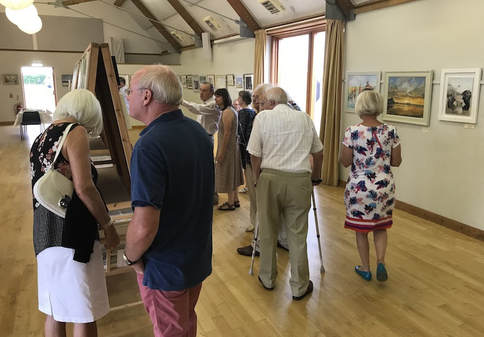 The event was a huge success, which was a great reward for all those who worked hard behind the scenes.

​The Preview evening was well attended with over 140 guests enjoying the art, wine and canapés. The feedback was very positive with many compliments that the overall standard of work had improved across the board. 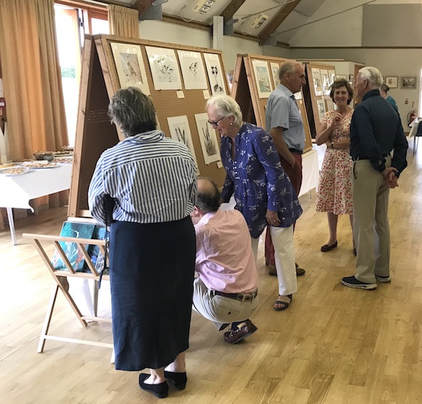 ​Over 150 works were on display from 27 different artists. The works were in various media - Acrylic, Oil, Pencil, Pen & Wash but by far the most popular in terms of sales were Watercolours. Favourite subjects this year were birds and local coastal scenes 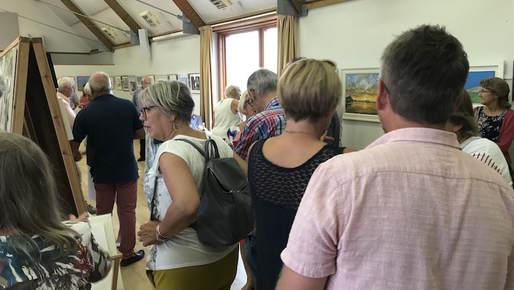 ​There were a steady flow of visitors, from near and far, throughout the weekend. Complimentary tea and coffee was available together with refreshing cold drinks - most appreciated given the hot temperatures 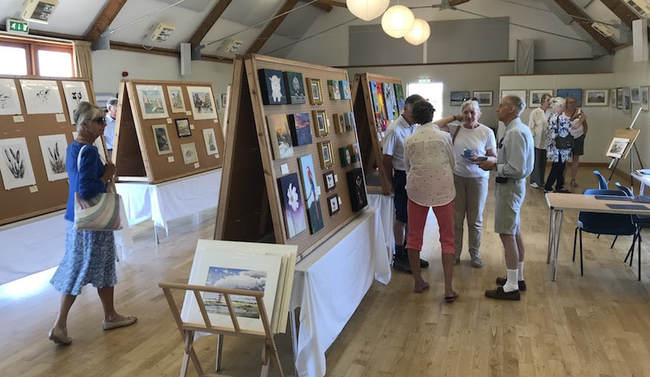 ​Like last year, the 'Have a Go' table proved popular with aspiring children and adults alike producing some lovely work.
The Art Group members are now already busy preparing new work for next year as well as for the Gallery @ The Chequers
which is also proving popular with the dinners at the pub.

The Art Group would like to say a big thank you to all the local businesses for their support including the kind raffle prizes for the Preview Evening, these include The Little Dairy, Howells Superstores and The Chequers. We would also like to thank all those visitors who attended the Exhibition and especially those who purchased work. Ten different artists sold work, some selling several works and all this helped funds for our chosen charities - The British Legion Poppy Appeal and Help for Heroes. 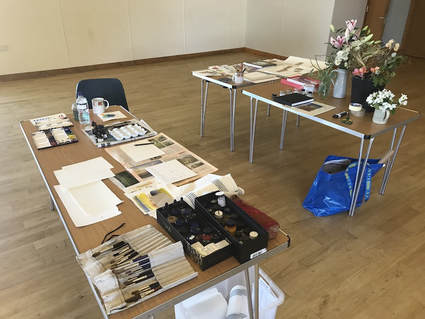 3rd July 2018 - Binham based professional artist Roz Ulph gave the Group a brilliant demonstration of the materials and techniques she uses in her work.

​Roz started the demo of pen, watercolour paints and watercolour ink. There are a variety of inks and suppliers some more vivid than others. A particular favourite of Roz’s was dark brown. Next the paper, again a range of suppliers and surfaces - smooth to ‘skiddy’ to rough. 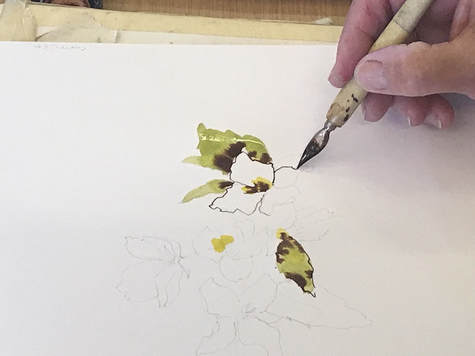 Roz says she paints loosely applying colours so they bleed into one another. Typically painting on a flat table to avoid runs, but also being prepared to tilt the paper to encourage the colours to blend whilst still wet. Roz paints very quickly applying the ink from her prepared palette.


Using some flowers as a subject, Roz mixes the watercolour paints first and paints quickly, switching from watercolour background with a brush to using dark brown ink for detail with a dipping pen. 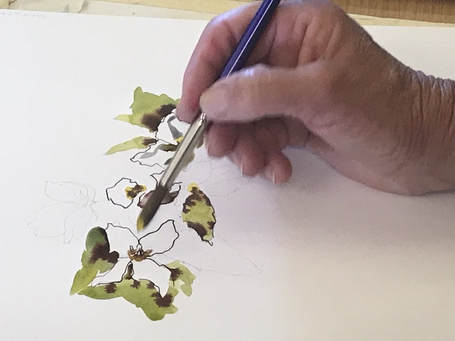 “
Tip not to do all the green at the same time.”

Then more of the same. Note the blending of the brown ink on the watercolour green. This is achieved by pressing harder on the paper so that the brown ink is released from the pen ‘reservoir’.
​
Another tip, Roz says “Never use a good brush for mixing colours, rather use a mixing brush.” 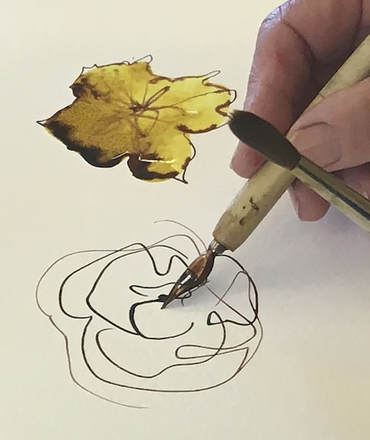 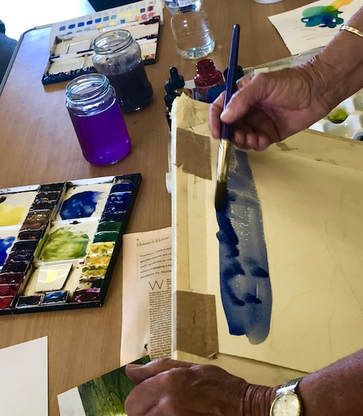 ​Next a landscape, again combining pen and brush and tilting the paper to aid blending.


Some interesting marks made from painting over scratches on the paper. 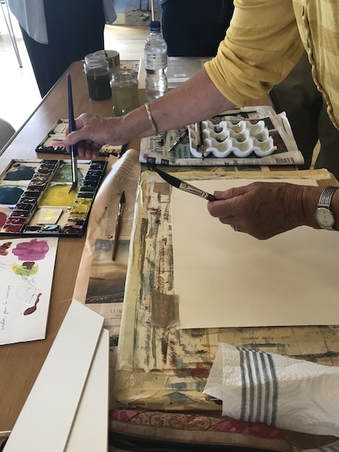 Roz then demonstrated the use of sword brushes. 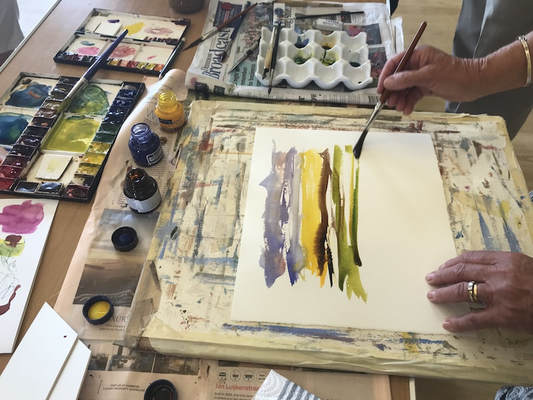 And finally, Roz demonstrated painting a landscape with inks:


A real masterclass Roz, thank you so much for demonstrating your inspirational techniques and sharing your tips. We look forward to a return visit. 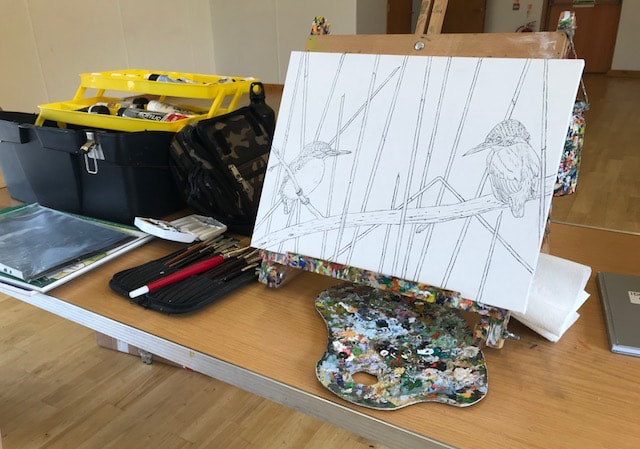 12th June 2018 - local wildlife artist Bob Crook treated the Group to a demonstration of painting birds. His subject was Kingfishers in acrylics. Here’s Bob’s set up:
​

Bob said he was self taught and started his painting career in watercolour working from light to dark. He now paints, almost exclusively, in acrylics and cannot get out of the habit of painting light to dark in acrylics, against normal convention.


He doesn’t usually use a coloured ground favouring several coats of white primer (gesso) on the canvas. He first draws the subject in pencil then over draws the pencil with Mars Black acrylic using a very fine brush - as in the picture above. It took Bob about an hour to prepare the canvas.

Bob’s inspiration often comes from his old sketches and recommends always carrying a sketch book to make notes and draw sketches of ‘moments in time’.

Bob favours Pro Arte brushes and confesses he’s not very good at looking after them. One tip is to use sable watercolour brushes for fine detail. This is ok he says as he waters down the acrylics. As there are such a range of acrylic colours Bob tends not to mix colour. For sky’s Bob uses Power Blue. His technique is to do the background first then add the colour for the birds 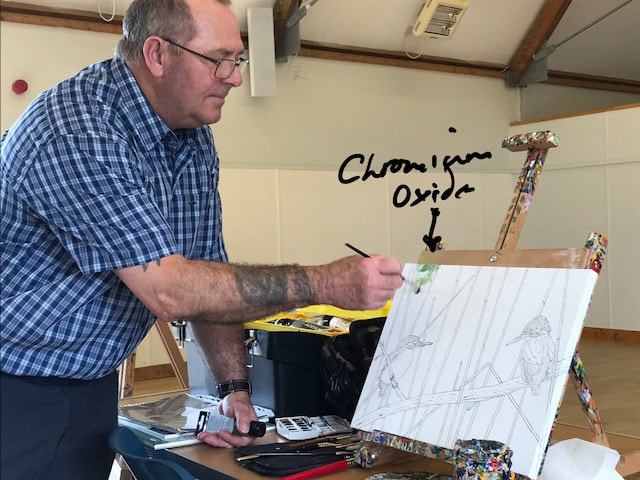 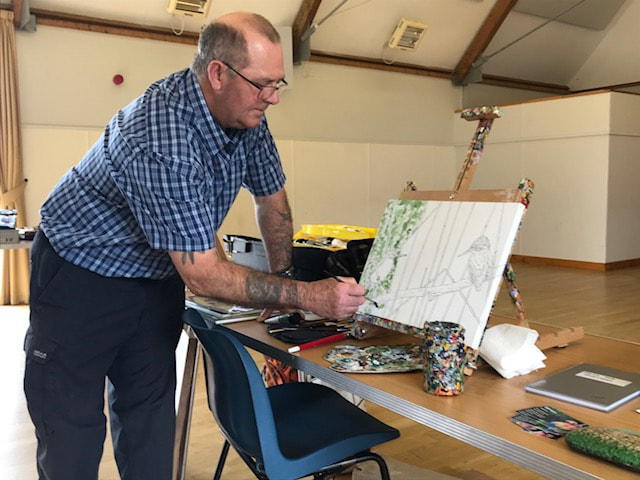 ​Bob adds Yellow Ochre to the Green on his palette to provide a contrast, then adds Mars Black for the darker tones. 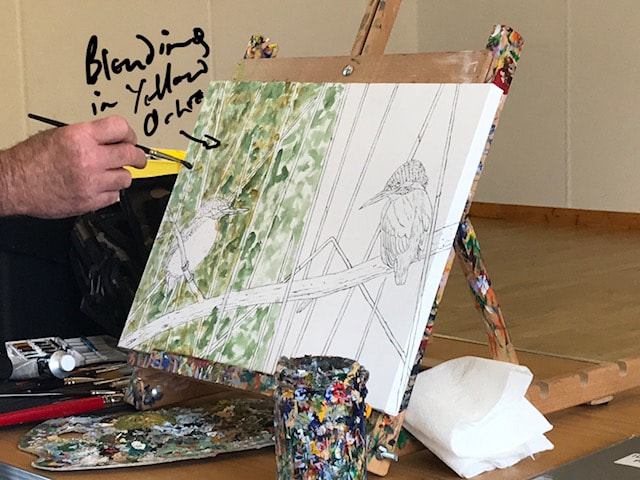 Then for the background reeds using Buff Titanium, not as good Bob says as an old discontinued colour called Bamboo. 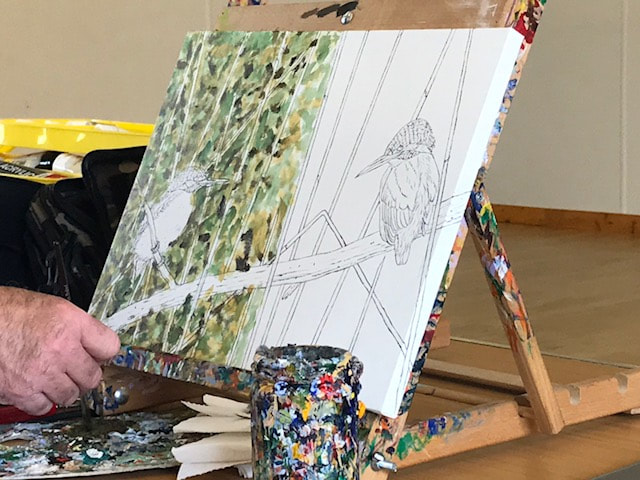 Bob uses Cerulean Blue and Cadmium Yellow Deep to block in the Kingfisher, adding Black for his bill and eye - straight from the tube! 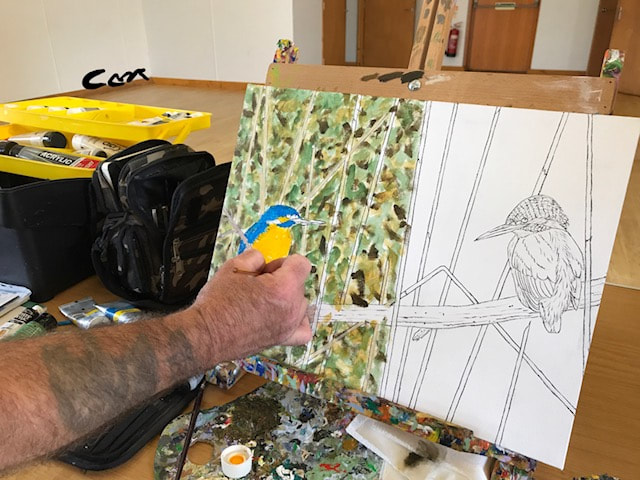 Then Bob adds White for detail, then adds Orange on the underside of the beak (Female). Continuing with the Orange for the body feathers.
... then red feet! ... then Powder Blue for detailed back feathers. Bob then adds more detail in White and Paynes Grey so it looks more 3 dimensional. Bob continues with detail. Remembering he has no reference material. Bob paints from his extensive subject knowledge and memory. Returning to finishing touches by adding Raw Umber to the branches and reeds. 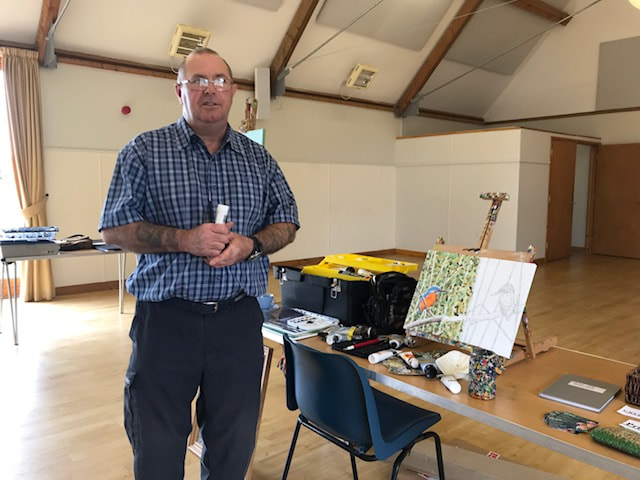 Brilliant Bob a real Masterclass in both painting birds and the use of acrylics, many thanks and look forward to inviting you back. Here's the end result, brilliant: 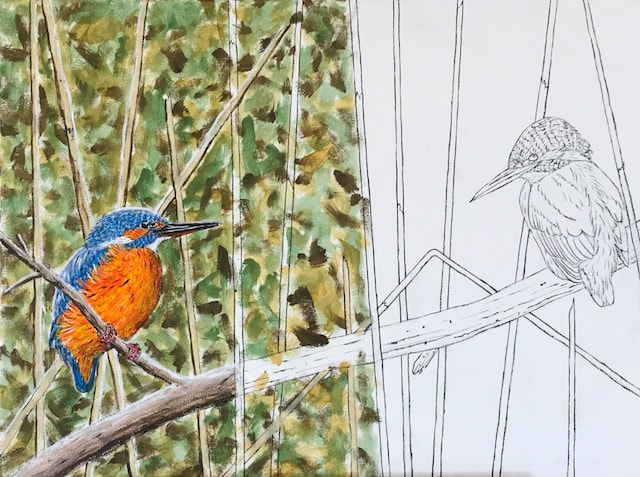 Robin from the Art Group gave an introductory talk about the art and technique of the acrylic pour. Firstly, describing the properties of acrylic paint and the various additives required to make the paint more "fluid" - a consistency slightly thicker than 'single cream' but not as much as 'double cream'!

Basically, the paint was mixed with a paint conditioner, in this case a PVA admixture. Several colours were premixed and a couple of drops of water added to help the paint run. Having covered the canvas with white to provide a wet surface, Robin them demonstrated the 'Puddle Pour'. First laying a small puddle of deep blue, then on top of that laying a lighter blue, then a further colour - magenta, then dark blue and light blue again and finally a small puddle of white. Then getting close to the surface Robin blew the paint out from the centre of the puddle repeating this several times and creating the effect of flower petals. Using the handle of a paint brush Robin defined the petals, drizzling some black and white around the petals to providing some contrast, and some finishing touches of green and yellow ochre for the stem and leaves.  Eh Voila! 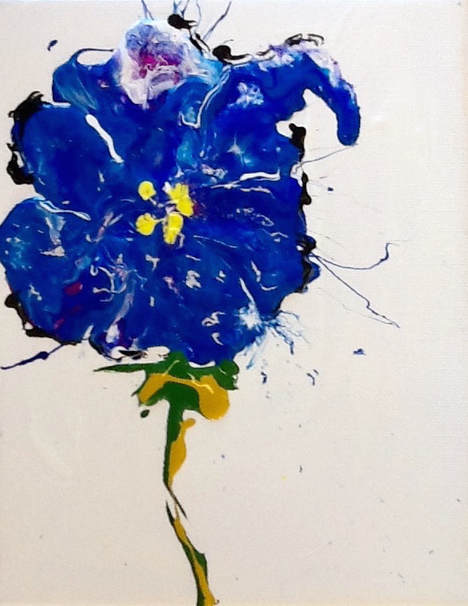 Next Robin demonstrated the 'swipe pour' basically laying down a random range of colours pouring lines across the canvas. Robin added drops of Silicone to the colours to react with the paint creating 'cells'. Taking a palette knife, slowly and lightly dragging the knife across the canvas to blend the colours. At this stage cells should be visible but the paint had thickened; so to accelerate the process Robin ignited his cooks torch and randomly ran the flame over the canvas. The heat from the flame should draw the silicone to the surface but it was not too successful!
A failure as the cells failed to merge so the canvas was enhanced with some puddle pour flowers - much better!
Robin's third demonstration was of a 'dirty pour' on a old vinyl record album (having covered the hole with masking tape). This involved adding small quantities of paint, one on top of the other, all in the same beaker. With the beaker half full of assorted colours, Robin then put the record on top of the beaker and 'flipped' the two over so the beaker was upside down on the record. Having left it to settle for a couple of minutes, the beaker was lifted and the paint free flowed onto the record creating a colourful marbling image. The finished effect looked akin to a distant planet.
​​ 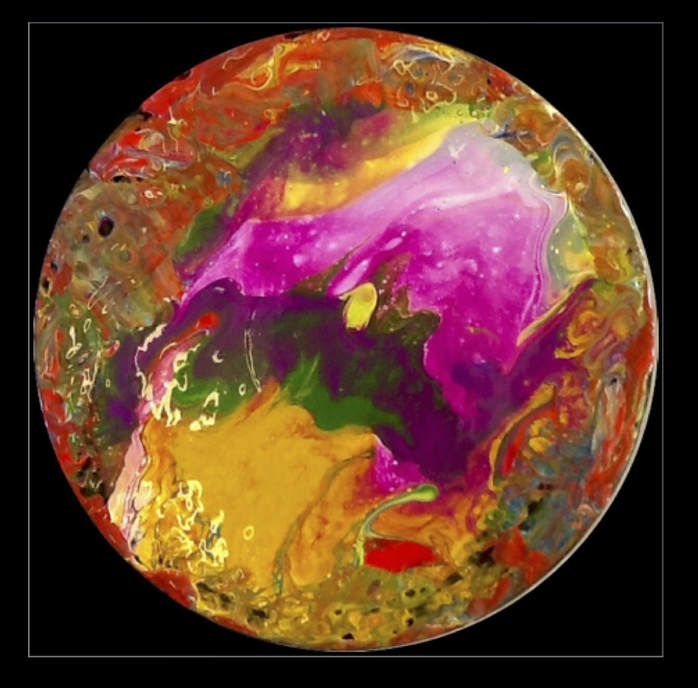 After the demonstration four brave 'students' elected to give it a go, with interesting varied colourful results:
Well done to Pauline, Brenda, Susie and Mo all great first Acrylic Pours.  Good cells Pauline! All in all a lot of fun and plenty of ideas to inspire the group.
Powered by